Earlier this year, before the Covid-19 pandemic hit, Arthey Associates’ Amy Woolliscroft was pleased to attend a joint meeting of the AHDB and Stabiliser Cattle Company in East Harling, Norfolk, discovering the cost and health benefits of outwintering suckler cows on strip-grazed fodder beet with Richard and Sue Evans’ herd of 133 Stabiliser cattle. 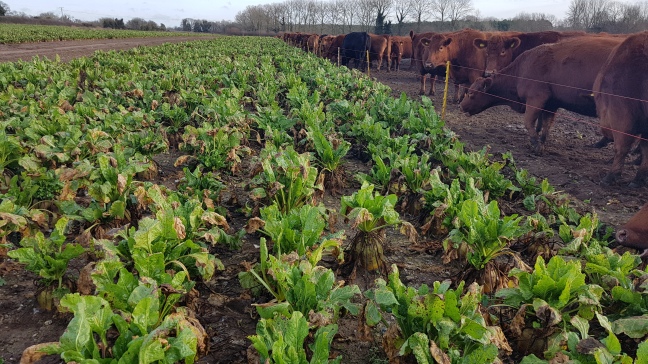 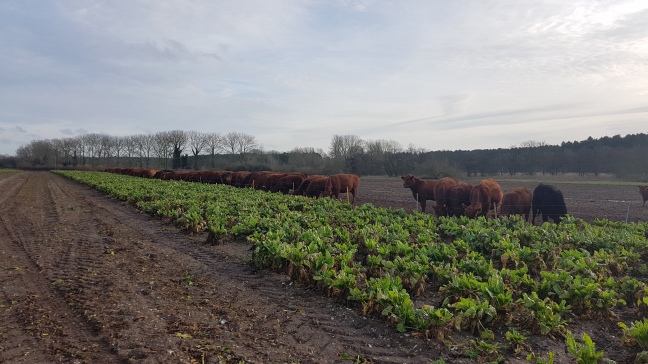 Richard said: “We’ve all got to drive down the costs of keeping cows. To survive in the industry we have to do two things: add value and keep numbers as high as possible to keep costs down.” Richard introduced Stabiliser genetics to his suckler herd in 2006 and hasn’t looked back. The herd is performance recorded and performance motivated, selecting mostly for calf vigour and mothering ability, as well as 400 day weight. Richard continued: “We are not loyal to Stabilisers but haven’t found anything that does the job better on our land.”

The right land is essential to make this form of strip-grazing work, and with the sandy soils of Norfolk, Richard is able to outwinter all of his Stabiliser females together, with heifer calves remaining on their mothers until four weeks before they are due to calve again. Richard explained: “This means that these young females cost us nothing to keep, whilst we have seen no detrimental effects to the subsequent calf with daily liveweight gain of male calves maintaining a steady 1.35kg/day.” Richard has fine-tuned the field stocking rate as the strip grazing moves across the field slowly, whilst adjacent grassland is essential as the cows are introduced to the system to avoid health complaints.

The benefits of keeping all 133 females together also include reducing labour and fuel costs, as Richard is able to open the next strip of grazing in a 20 minute window twice a day, leaving time for managing the output of the farm, the store bull calves. There is also a handling system within the outdoor system, with cows having to walk through it to get from the grassland to the fodder beet when they are fed; Richard finds that this reduces stress on the cattle when it is time for veterinary checks or vaccinations.

Amy said: “It was a pleasure to visit Richard and his family, and see the benefits of his system. It is certainly hard to argue against the results that the enterprise is producing, with a tight nine week calving period, and all bull calves sold away as stores and finished at 12-14 months.”

Arthey Associates is a trading style of T Arthey Limited, a registered company in England and Wales.